Right after they’re apprehended naked on the Low Road.

Here’s how to roll: 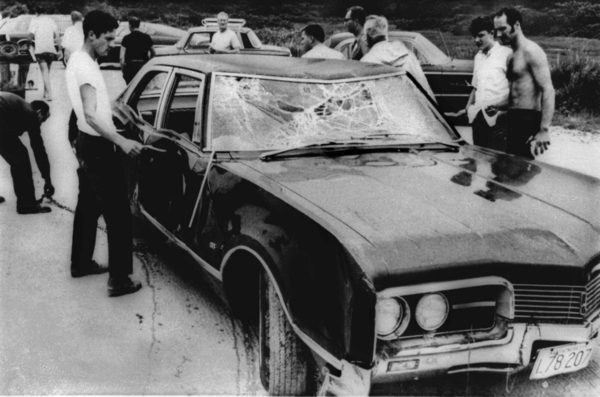 No one ever drowned in Roy Moore’s car…

First – you have to get high. Looking at yourself in the mirror usually does the trick. Then take off your clothes and parade in front of your female Secret Service agents as you take your morning swim.

Then for lunch, maybe a fresh young waitress squeezed between you and your best buddy in the Senate: a “waitress sandwich,” get it?.

As [Carla] Gaviglio enters the room, the six-foot-two, 225-plus-pound [Sen. Ted] Kennedy grabs the five-foot-three, 103-pound waitress and throws her on the table. She lands on her back, scattering crystal, plates and cutlery and the lit candles. Several glasses and a crystal candlestick are broken. Kennedy then picks her up from the table and throws her on [Sen. Chris] Dodd, who is sprawled in a chair. With Gaviglio on Dodd’s lap, Kennedy jumps on top and begins rubbing his genital area against hers, supporting his weight on the arms of the chair. As he is doing this, Loh enters the room. She and Gaviglio both scream, drawing one or two dishwashers. Startled, Kennedy leaps up. He laughs. Bruised, shaken and angry over what she considered a sexual assault, Gaviglio runs from the room.

Later, you and five of your fellow married buddies rent a love shack on Martha’s Vinyard, with six unmarried young secretaries (who can’t type) and call it “an office party.” You take the pretty blond one, ‘Mary Jo” or ‘Paula’ or “Rose” — something like that — into a bedroom, drop trou, and say “kiss it” as lovingly as you know how. Things get a little rough. Afterwards, you say, “better put some ice on that.” Before pulling up your pants, you sign in as “Carlos Danger,” and tweet a picture of your member of congress to a teenaged girl you’ve “met” online. Now it’s time to get on “the low road,” with another one of the babes. Keeping in mind… you can’t get to the “high road” …until you get it on in the car, on the low road.

Late that night, Kennedy and one of the women, Mary Jo Kopechne, left for their own private party at an equally isolated beach but never made it.  The car went off a small bridge.  Ted Kennedy left Mary Jo alive, trapped in the car and gasping for air.  He bypassed homes near the bridge, from which he could have called the police, and walked over a mile back to the party house.  Once there, he sought out his lawyer friends, Joe Gargan and Paul Markham, to help him work out his alibi.  Compromised by a presumed lawyer-client relationship, they had to wait for Kennedy to call for help.  Kennedy never did.  He may have been hoping that Gargan, the family fixer, would take the rap.  Mary Jo, meanwhile, struggled to survive for perhaps an hour, even more, before suffocating.

Back to work: on the plane ride to DC, you notice that Leeann Tweeden, your curvaceous aide has fallen asleep in her seat across the aisle. Opportunity only knocks once you remind yourself – time for a saucy selfie! Mugging for the camera, you cup her left breast while giving your best lascivious leer. Best of all? You take the shot with her camera!

After arriving in DC and taking your seat in the Senate, you launch into Roy Moore, some old Republican redneck who’s running for a Senate seat in Alabama:

“I, of all people, am aware that there is some irony in the fact that I am leaving while a man who has bragged on tape about his history of sexual assault sits in the Oval Office and a man who has repeatedly preyed on young girls campaigns for the Senate with the full support of his party.”

Feeling your oats after shredding Mr. Moore and President for the TV cameras, you pull out a cigar — but before you can light up you run into that pretty young intern who works for you. She’s wearing that blue dress again, the one that fits her like a sausage. Cigar, blue dress, sausage? A light bulb goes off in your mind, you grab her and pull her into your office… for some ministering.

Hey! You’re A Champion For Women! Lyin,’ layin,’ grabbin’ or lovin’… you’re the Lion of The Senate!